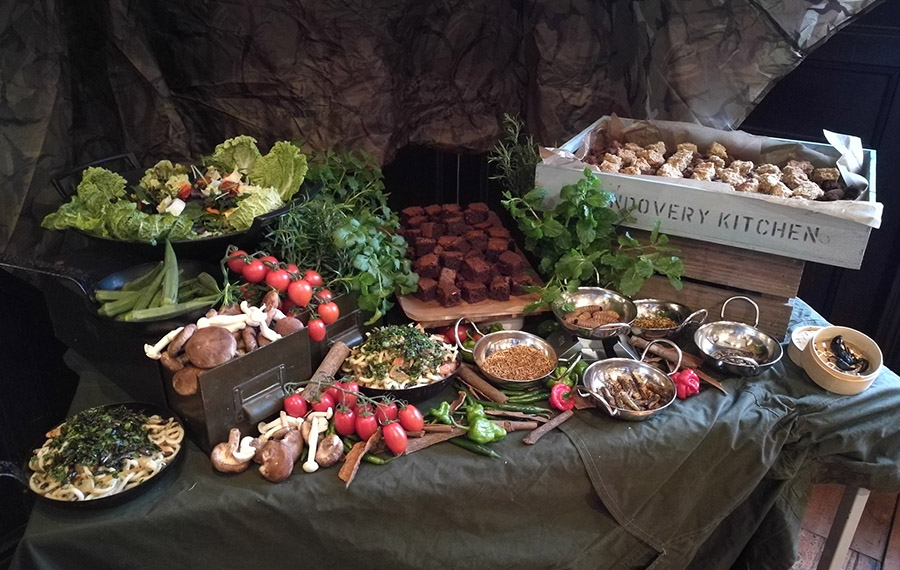 There was an old woman who swallowed a fly……

Pupils at Llandovery College were testing their taste buds and exploring the flavours of some unusual cuisine as the Holroyd Howe catering team laid on a ‘Bush Tucker Trial’ tasting event at College. This was a fun event and a new concept for our pupils as they were led on a culinary journey to challenge their palates and their resolve. In typical ‘I’m a Celebrity Get Me Out of Here’ style there was a whole range of creepy crawlies to tackle and taste and the only element missing was Ant and Dec!

Holroyd Howe Regional Development Chef Scott Harrison-Jones joined the Llandovery College catering team for the event and was able to talk through the menu of bugs for pupils to sample. He encouraged pupils to try a whole range of new culinary delights such as; a high protein banana smoothie with cricket powder, grass hoppers pan fried in garlic butter and incorporated into a delicious salad, stir fried Thai noodles with vegetables and crickets, all finished off with chocolate brownies and flapjacks made with meal worms and buffalo worms.

Our pupils were taught about the benefits of opening their minds to trying new foods as, when they are adults and have the opportunity to travel across the world, they will be faced with a variety of food that is common place in other cultures and societies. Nick Phillips a Year 13 pupil at Llandovery College said: ‘’It was great to try different food, I was a little freaked out as it is similar to the food I give my pet lizard, but once I got past the initial reaction it tasted fine, similar to the taste of nuts. I really liked the grasshopper salad. It has been great to try this in the safety and comfort of school in preparation for travelling and encountering this in other countries.’’

There are a number of benefits to eating insects, they are very high in protein and very low in fat and carbohydrates. The insects used are sustainably farmed and specially produced for consumption and their production has far less impact on the environment than other sources of protein. It is estimated that up to 80% of the world’s population includes insects within their diet and that figure seems sure to rise following this eye opening event!